My friends know that I have a crazy cinnamon obsession. I sprinkle a teaspoon of cinnamon on my Greek yoghurt, sprinkle in my pancake, waffle, oatmeal batter, and I love apple pie with a good dose of cinnamon. Oh, did I also tell you that I absolutely love cinnamon sugar donuts? 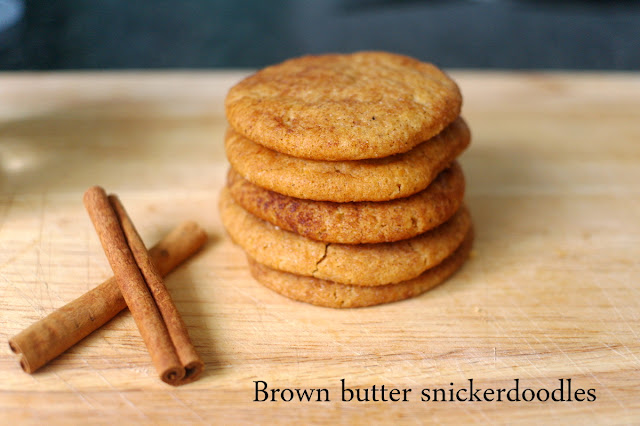 These brown butter snickerdoodles are out of this world. But, make sure you make a batch to share with. In a perfect world, butter and sugar would be ridiculously healthy. Except, we don't live in a perfect world. I don't want to think about how many calories are in 1 cup of butter.. I'm just going to cinnamon-sugar-coat it and pretend that it's not that unhealthy. Hey, cinnamon is pretty darn good for your metabolism right?

Browning butter was so much fun, until I looked away for a second and it started to foam and explode out of the boiler, so just be careful!

Warm cookies are the absolute best. With these, it's like butter melting in your mouth, with a nutty and toffee taste from the brown butter. And then you have that warm sensation of cinnamon.

WHY IS BUTTER SO GOOD BUT SO EVIL AT THE SAME TIME?!!?

Have you asked yourself that before? 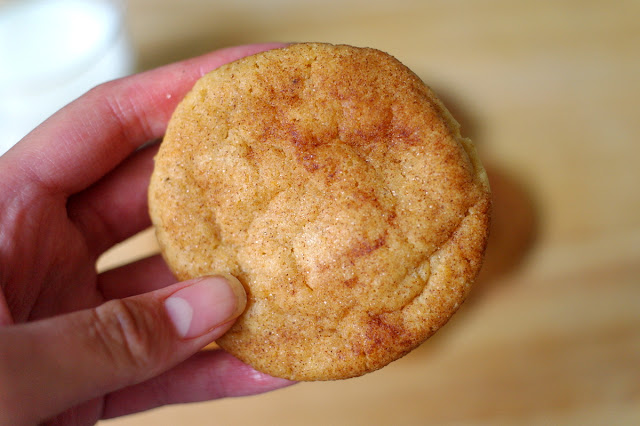 * I reduced to 3/4 cup brown sugar.
* I reduced to 1/4 cup sugar. Reasons being, I didn't want to have an overly sweet cookie, since I knew I was going to be rolling in a sugar as well.

Method:
1. Sift flour into a large bowl and combine with baking soda, cream of tartar, 1/2 teaspoon cinnamon, and salt in a bowl and set aside.
2. Brown the butter: Melt butter in a saucepan over medium heat, and after a couple of minutes, it should start to brown. Constantly stir and whisk.
3. With an electric mixer (or by hand), mix butter and sugar until combined. Beat in egg, yolk, vanilla and yoghurt until combined. Add the dry ingredients slowly and combine.
4. Chill your dough for 3 hours, or as long as possible in the fridge.
5. Preheat oven to 180 C (350 F). Once dough is chilled, measure about 2 tablespoons of dough and roll into a ball.
6. Mix 1/4 cup sugar with 2 teaspoons of cinnamon in a bowl. Roll balls in cinnamon sugar mixture. Place dough balls on parchment paper, 2 inches apart.
7. Bake cookies for 8-11 minutes (I baked mine for 13 minutes because I wanted a more firm and crunchy texture), or until the edges of the cookies begin to turn golden brown. They will look a bit underdone in the middle, but will continue to cook when out of the oven. Bake longer if you want crispier cookies.
8. Cool cookies on the parchment paper for at least 2 minutes, and then transfer to a wire rack to cool completely.

*My cookies didn't come out as puffy and thick like hers, I'm not entirely sure why. Do make sure you rest the dough in the fridge for a while. Monique recommends to chill the dough overnight, if you want a puffier cookie. Other than that though, the cookie itself is amazing.