After I visited Dubrovnik, I went to Bosnia! Bosnia is bordered by Croatia and Serbia. The Turkish also came centuries ago, so some parts you can tell are Turkish-influenced.  It is rather quite hilly and mountainous there, and it was really hot at that time! Bosnia is really pretty, definitely lots of natural beauty. 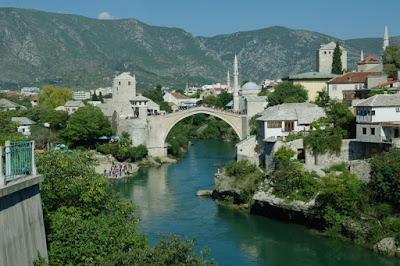 I was surprised to find that Bosnia is predominantly Muslim. With my knowledge as a 13 year old at that time, I didn't know much about Europe, so I was very, very surprised. The Ottomans were the ones who actually brought Islam to Bosnia.

Not too long ago, actually in the 90's, there was an ugly, brutal war. I saw a lot of buildings, that had bullet holes in them. Big ones.

Something I didn't see on my trip until arriving in Bosnia; I saw these three little girls , the oldest carrying a baby around, crying and begging for money.They all kept on walking around asking for money from tourists. I felt so sorry for them. I'm just in the minority of the world who don't have to go around the streets, begging for money or not having shelter, food and medical aid. While I'm travelling and eating amazing food, there are millions suffering, people living under the poverty line.  I really am lucky aren't I? The problem is, a lot of kids my age are complaining about how the Iphone4 sucks and looking at our celebrity culture we see everyday on our TV screens, which many of us envy and use that to compare their lives to what we see.

Anyway, our local tour guide was really nice, our Malaysian tour guide joked before she came that she's "Miss.Bosnia" since she's incredibly pretty. She also told us her past experience, and how she remembered escaping through this tunnel she showed us, during the war. I really wonder what it must've been like. Oh just to add, I saw this gypsy whom was scarily around every street corner we turned. The local tour guide also warned us that there are pick pocketers, and that made me rather nervous, clinging to my bag, as if I was holding onto my life.We went around plenty of markets, visited a mosque , ate chicken for lunch.
Dinner was pretty good! Main course was chicken, which was pretty average, but the cake. OH, THE CAKE. I would've liked a second piece. Think creamy layered cake, with walnuts and some sort of custard. Hen hao chi! 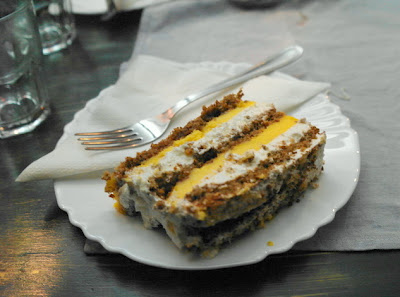