I'm posting about Turkey this time! I went to Turkey with my parents in late December. I left about 2 days before Christmas. Turkey is probably one of the most interesting places I've been to besides south-eastern Europe. You see, I like ancient sites and history (I don't understand why  a lot people don't like history..). Turkey has a lot of history, seriously. And a lot of ancient sites, probably the most I've ever seen. According to our tour guide, he said that Turkey has even more ancient artifacts , places more than Greece (I was surprised to hear that). I expected Turkey to be 'great' but it was greater than expected! My dad was left with a really good impression and loved the places we visited. He also likes history. I would say Turkey is an 'exotic' place to visit, it's not your typical European country with lots of cathedrals and in some, lots of castles.

We always travel with Malaysian tours so the tour company we travelled with was GTT. Never taken GTT before, had always taken Reliance from the past few tours (Japan, Europe) which had been good experiences. I would say Reliance is better. Our tour group leader was this lady, Stella. We had a local tourist guide, Bill (Well his real name is a really complicated name that we Asians couldn't pronounce or remember.) I love his accent,  it's like "It izz veeery coldd outsidee". He's quite funny too !

Since we arrived in the morning, we already started the tour. We visited Hagia Sophia and the Blue mosque which are pretty impressive. I have to say though, they both look REALLY alike except for the colours. Hagia Sophia used to be a church. Our tour guide mentioned about Muslims in Turkey... According to him, Turkey is 99% Muslim. But, he stressed that it's not a 'Muslim country' meaning that there aren't Muslim laws, you practice being a Muslim by heart. Not everyone fasts during Ramadan or not everyone doesn't eat pork or drink alcohol, it's not as strict as other Muslim countries around the world. I found it quite interesting to hear, I didn't expect the country to be practising the religion 'by heart' instead of by force by the law. Those are quite good values, not having to do it by force. But then again, of course some people will be lazy to practice the religion. 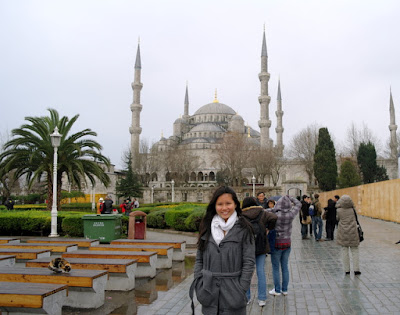 We also went to some place um I can't really remember lol. All I remember is that we went inside these kind of like museum places and they had all sorts of stuff in it. And I had a hot chocolate. It was so cold, I was so glad to have something warm.


Lunch was at a restaurant! Had nice food, nice introduction to Turkish food. Though the food wasn't hot. Like it was rather cold.... A thing everyone noticed throughout the trip.Usually the food wasn't steaming hot or anything. I liked that lunch, but the food was the same everyday during the trip! From one place to another, SAME FOOD. I'm not even kidding. It was either....


. Buffets for breakfast everyday, sometimes for lunch and dinner. And buffets had the same things. Vegetables, soups blahblahblah.

. Set meal. I really got sick of those. We had them for either lunch or dinner. Or lunch and dinner on the same day. We ate some kind of lentil bean soup with flatbread, chicken with rice and vegetables (Once it was fish) and dessert was either fruit or some sickening sweet syrup-y cake thing. The cake is quite gross if you ask me.. They serve a lot of that there.

That day was so tiring, honestly... It doesn't sound like much, but it really was. I was sleeping the whole way eugh.

We also visited a shop selling probably about 20 or more flavours of Turkish delight, tea , halva , lotions etc. Turkish people are really friendly, especially the sales assistants. They really try to haggle you lolol! I know it's their job, but they really do try to persuade you. I was trying a lot of the Turkish delight samples for some reason even though I don't like Turkish delight. Those Turkish delights are extremely sweet and chewy, coated with a lot of icing sugar! Very sweetening oh my. Even more sweetening than the chocolate Turkish delight. I think the only Turkish delights I liked from that place was the grape and pistachio one. The rest were gross. My mum bought several boxes of pomegranate and apple tea! Those teas are really nice, tried the samples. I especially like pomegranate. We also bought halva which is like a soft nougat. We bought the pistachio halva! Yummy. 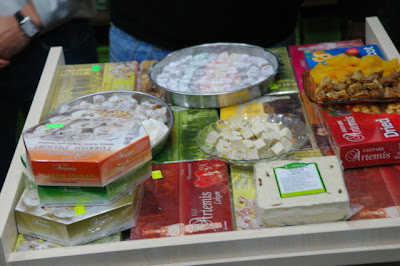