The drive to Cappadocia (Our next stop after Pamukkale) was an extremely long drive. I can't exactly remember how many hours it took,but maybe something like 8 or 9? But it wasn't as bad as I thought it would be, I had my Apple product as a companion.

We arrived around evening, I SAW SNOW FOR THE VERY FIRST TIME IN MY LIFE. Okay, that's false, but I've never actually seen a city covered with snow...Ok I have but that was when I was 2 and a half years old in Washington D.C, but how are you supposed to remember something 13 years ago?  Anyway, we stayed in Cappadocia for two nights. 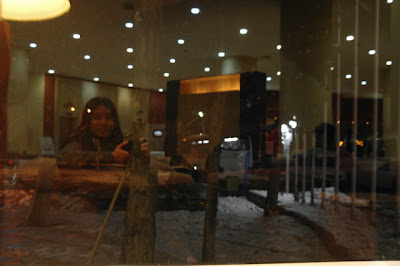 I felt like singing 'Mistletoe' by Justin Bieber (No I do not like Justin Bieber. But I like the song I have to admit)  because there was so much snow and the Christmas tree was still up! 'I should be playing in the winter snow,but Imma be inside the warm hotel. I actually kind of wish it could snow for a few days in winter in Melb. I could take tons of photos! 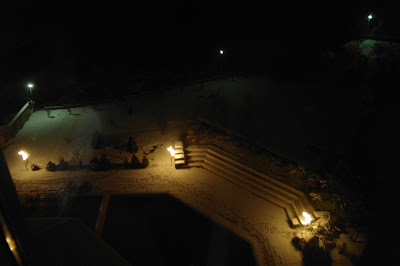 It's really pretty and exciting to see a city covered with a blanket with snow. But of course, it was really cold.

Dinner was surprisingly good, I got hooked on to these flat breads with toppings that taste amazing and it was actually steaming hot. That was nice for a change. I was eating myself with dessert. I go crazy with dessert at buffets, it's not even funny. I inherited the 'sweet tooth' from my mommaa!

Next morning, well I can proudly say that I've been on a hot air balloon! It was an amazing experience. It wasn't as scary as I thought it'd be (I have a fear of heights), it was really calm and not that cold if you wore the right clothing. The views of Cappadocia are really pretty, the only thing I'd recommend is to go in warmer seasons. Typically, autumn or spring is your best choice. Winter is slightly too cold, most of the city is covered with snow so you can't exactly see everything. I actually thought there'd be only a few people on one hot air balloon like how you see in movies, but they actually fit like 30 people into these tiny compartments. I wish I had taken  my Samsung hybrid,but my dad said I could only take my video camera since it's easier. Which I agree,but I could've taken some pretty nice pictures! There were some photographers and they sold some of the photos. So I bought one.

My parents actually didn't go. My mum thought it would be too cold.

Anyway, the whole tour group got dropped off at some random place which I felt was colder than up there. Celebrated with sparkling juice LOL. Oh, and they spelt my name right.

Not. My piano teacher was like "That's even worse than my spelling!" because she has taken all these years to finally spell my name right ehehe! My dad said "Keep it like that! It's like your Turkish name!!!"
Later in the day, we travelled to all sorts of caves. Cappadocia has really interesting scenery, I don't think you'd ever find a place similar to it besides Disneyland. What I mean is, some of the caves looks like what you'd find in those yeti rollercoaster rides in Disneyland, except Disneyland's are man-made, but Cappadocia isn't. Lots of formation over a very long time. The amazing thing about Cappadocia is how the Christians hid there for so long. Christianity was illegal a while back, so they went to Cappadocia to hide.

We were taken to this Turkish carpet shop and yeah. Lots of carpets, silk, not silk etc. Hard work. Very,very pretty but not cheap! Some carpets were selling for $5000 USD!! Outrageous! I could buy a couple of shoes, clothes and stuff you know? OH WAIT I CAN EVEN BUY A PLANE TICKET. 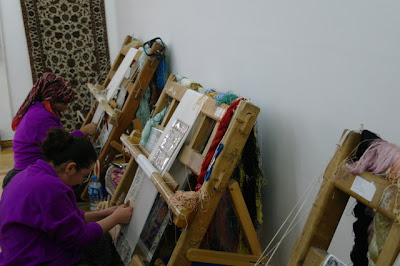 Went through this tiny cave! Everyone's legs were aching, it was a real workout. You had to crawl and crawl and crawl. I've never been in a cave like that except for my year 7 camp. We went caving, which was muddy inside this cave but it wasn't that small, it was so much fun!
Night time, well ,that was kind of a blur. After dinner, we went to this cave like restaurant like place and there were SO MANY PERFORMANCES, never ending performances if you know what I mean. One dance I distinctly remember (I just searched it up on Google, the name of it is called 'Sufi whirling') is a religious dance. They had a few men, they were wearing white. They spun continuously with all sorts of hand gestures for literally a few minutes. Something like 5 or 10. I,myself got dizzy even just watching them! They never stopped spinning. We weren't allowed to take pictures though,since it was a religious dance. 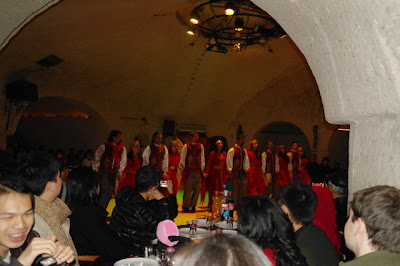 Then there were heaps of other Turkish dances and then BELLY DANCING which is super cool. The lady can really move her hips. Reminds me of Shakira. 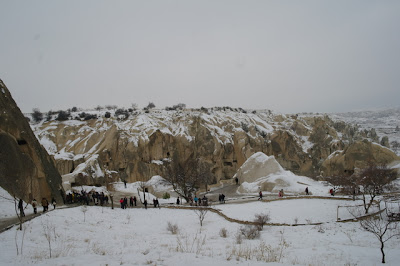 Cappadocia is by far one of the most unique place I've been to so far. In terms of natural scenery. Only complaint is, I WISH I WENT IN AUTUMN!