I have discovered the wonderfulness of brioche. I had my first taste just recently when my oldest sister brought home some brioche from a French bakery in the city. I've been reading everywhere that it makes the best French toast. I couldn't agree any better! 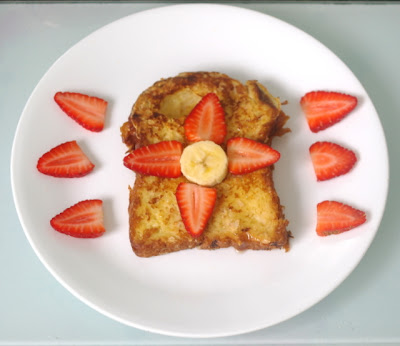 The other times I've made French toast were with normal, bread slices; the ones I use for sandwiches. They were pretty ordinary. But brioche just takes it to a whole new level.  I'm also starting to conquer my fear of recipes involving yeast, so I can take on some cinnamon rolls, pizza and breads like challah and brioche.

I came up with my own French toast recipe, and I used an olive oil technique. I read on Cannella Vita's blog, about her technique of using olive oil instead of butter. I agree that it works better than normal butter. Plus, it's healthier than butter. I'll probably stick to this technique for French toast in the future. I used vanilla bean paste instead of normal vanilla essence because vanilla paste brings out the flavour a lot more.
Top with strawberries, bananas, blueberries; whatever fruits you like! You can even slather on some Nutella (my personal favourite), peanut butter or just butter. And of course, honey or maple syrup.

1. Mix all of the ingredients together in a large bowl, using a whisk to beat the eggs.
2. Dip one side of the bread slice and let it soak in the mixture for one-two minutes. Then flip over and soak the other side.
3. Put about a teaspoon- teaspoon and a half of olive oil in a pan, over medium heat.
4. Transfer the bread slice dipped in the mixture and fry for about 2 minutes on one side or until golden, and then flip over.