So my so-called 'holiday journal' was a complete failure. But in my defense, I was literally at home for the past two weeks apart from a few outings..
At home/outdoors 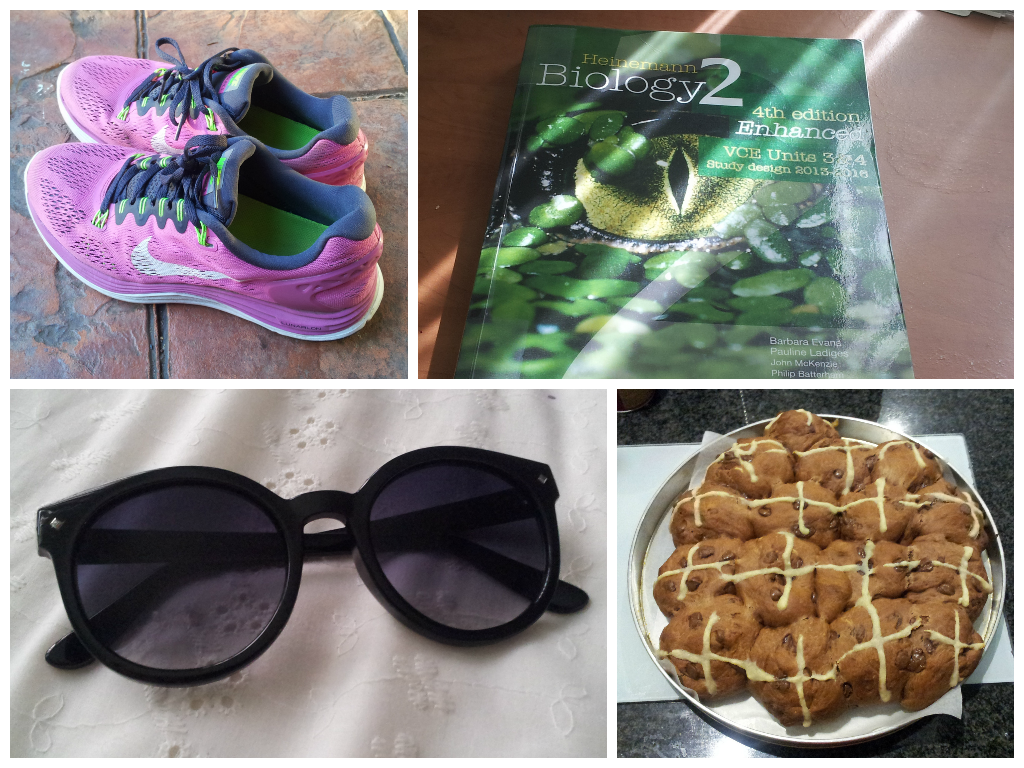 - TV show marathons (Falling off my chair when my favourite team gets eliminated from the Amazing race)
- Bake a lot. I made double chocolate hot cross buns twice.. The second time due to my sister's insistent demand of wanting something chocolatey. But I don't blame her. She's studying for her actuarial exams (brainy) and is rather quite stressed.. Chocolate is everyone's friend, people! I also roasted a chicken for the first time, made panna cotta with berries, brownies, tortillas... mhmmm..
- Throughout the week, the weather was really lovely! Blue skies, crisp autumn air. Gave me a chance to wear my favourite sunglasses from Sportsgirl when I went out for some walks.
- Read three books. A little disappointed I didn't read more.
- Holiday hw. How mundane. I struggled to pick up a pen because I felt so lazy.That biology book you see up there? Not the greatest source of reference.. As much as biology excites me, this textbook doesn't. Slabs of writing and an insufficient amount of diagrams (diagrams are usually the best way to learn with bio).

Some interesting outings
- Watched Captain America 2 and Spiderman 2. Some serious good movies.
- Had lunch & dessert with friends.
- Went to the beautiful State library in the city to study for barely 2 hours with friends. The majority of the time? We ended up spending most of our time having brunch at Manchester press club and Starbucks & Cacao green. And a little bit of shopping. #soproductive
OH AND I finally sat for my Learner's driver's knowledge test so I can start driving soon! Probably should've done it.. A YEAR AGO, but I was a little lazy and I'm still worried about being a hazard to other drivers on the road..