You may be a tad confused about the title. And also why I'm referring to 'autumn' or 'fall' right now. Apple brownies? Where's the chocolate? Autumn? Isn't it spring? 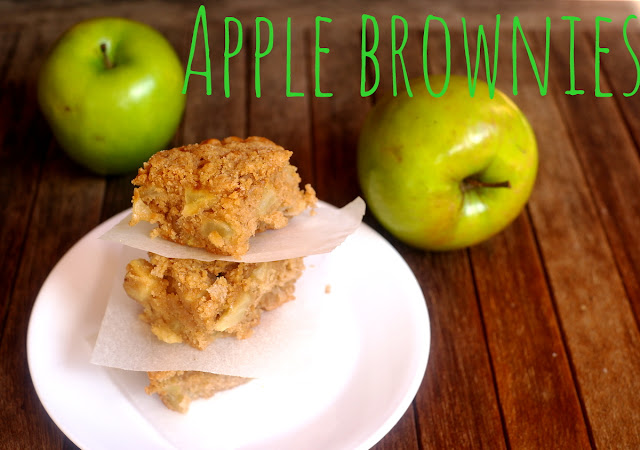 First of all, let me clarify something. I live in Australia, which is in the Southern hemisphere. The way the seasons work here, compared to the Northern  hemisphere (a majority of places), is the complete opposite! So, while you guys are having a fun summer, with extremely long vacations and the best produce of fruit, I'm stuck with cold weather, and missing the strawberries and mangoes. While you guys have winter during Christmas, we're having summer. Yeah, we have a 'hot' summer, or 'Christmas in the sand' (reference to Colbie Caillat). If only Australia was in the northern hemisphere. I've always dreamed of a snowy white Christmas... 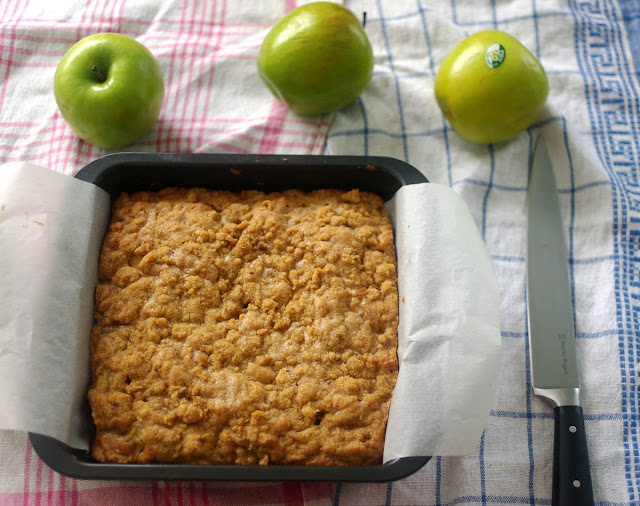 Anyway, I honestly don't know whether you'd call these apple 'blondies' or 'brownies', but I'm going with what The meaning of pie titled them as: apple brownies. 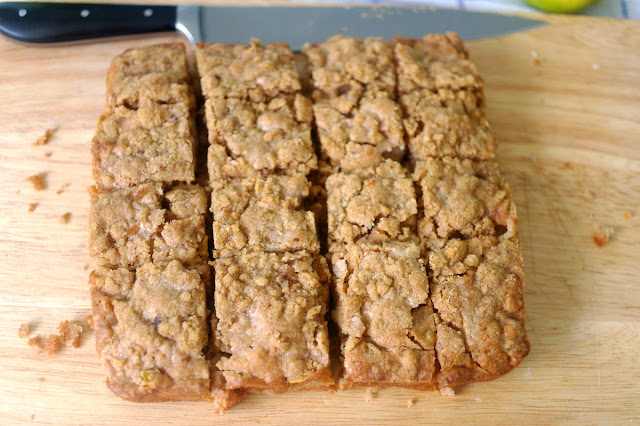 This may see somewhat similar to my apple tea cake, except there's streusel on this one. Plus, this is so much easier to transport and share, rather than bringing a whole cake! I also slightly changed the recipe, reducing the amount of sugar (as usual), and added less apples. I used 1 and 1/2 diced apples, because 2 would've been too much for my liking. I also changed up the streusel. The original recipe calls for melted butter for the streusel, but I used softened. This streusel was the best part of the brownie!

I could get used to smelling apple, cinnamon and butter in my kitchen... 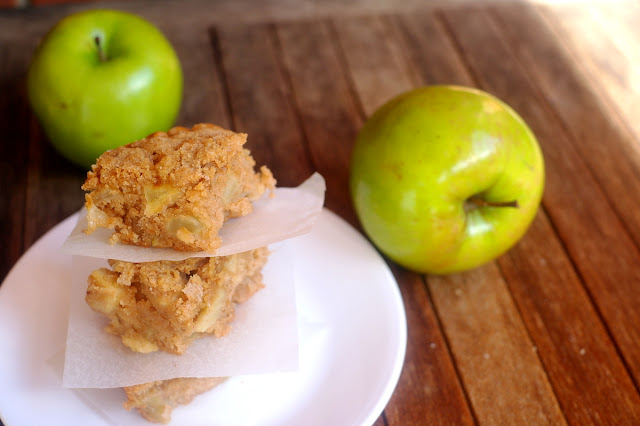 Method:
1. Preheat the oven to 180 C (350 F). Prepare a baking dish (I used 8 x 8 inch) baking dish by spraying it with non-stick cooking spray or lining it with parchment paper.
2. For the brownies, combine the butter and sugar in a bowl. Whisk for 3 minutes until smooth. Add the egg and whisk until fully incorporated. Fold in the diced apples and chopped nuts.
3. In another bowl,sift flour, and combine with baking powder, salt and cinnamon. Add the flour mixture to the apple mixture, and mix gently to combine. You will have a very thick batter.
4. Pour batter into the prepared pan and spread it evenly with a spatula or the backside of a spoon.
5. For the streusel, combine the sugar, cinnamon and flour. Put in the button and rub gently with the flour mixture with your hands, until you get a sand-like consistency. Distribute the topping evenly on top of the brownie batter.
6. Bake in the oven for about 30-45 minutes, depending on the size of your pan. Mine took about 30-35 minutes.
7. Remove the brownies from oven and allow to rest for half an hour before cutting them into squares.You can serve them at room temperature, it's best when it's freshly baked. However, I like to refrigerate mine.