This is a bit of a messy post, but I just wanted to do some quick reviews of food around the city and also Pappa Rich in Chadstone.
Guzman and Gomez
I tried some soft shell tacos with spicy chicken guerrero at Guzman and Gomez on Swanston street. About 2 minutes away from Melbourne Central if you walk there. The tacos were quite nice. 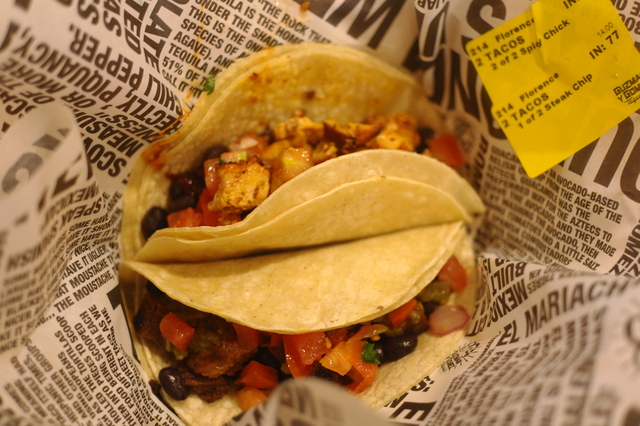 Even though it's sort of considered as 'fast food', it's not McDs 'cheap', but it's not overly-expensive either. And this is a lot healthier than McDs.
I had the chicken guerrero burrito yesterday, and it was SO filling! I didn't have my usual round of Cacao Green frozen yoghurt in the city. There's some rice, black beans, grilled chicken, cheese! I quite liked it. The only bummer thing about this place is that, there is an additional cost to add guacamole :( $2 extra.

11 inch pizza
I tried some magherita pizza at 11 inch pizza. The place is TINY! But the pizza was absolutely delicious. I really enjoyed the crust because it was rolled out so thinly, I don't know how they do that. The thin crust made it feel not too heavy. The best thin crust I've ever had. 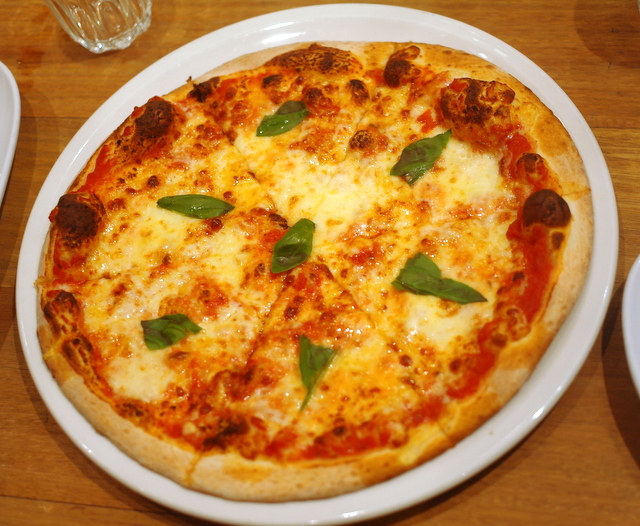 Brunetti
I only shared a slice of cake with Anika, and we both agreed that it was seriously so heavenly. The crunchy wafer makes everything better. I think the cake is called royale? And it is $6.50 for a display cake slice. Cheaper than Le petit gateau, and a bit bigger. BUT Le petit gateau has more complicated cakes. Anyway, I really enjoyed this cake. Very chocolate-y and nutty like Ferroro Rocher. 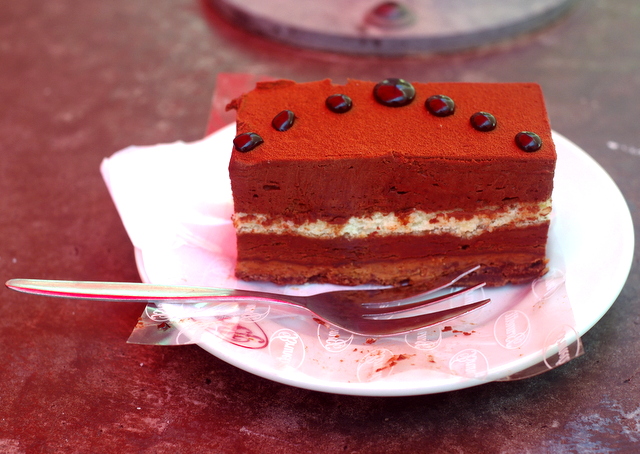 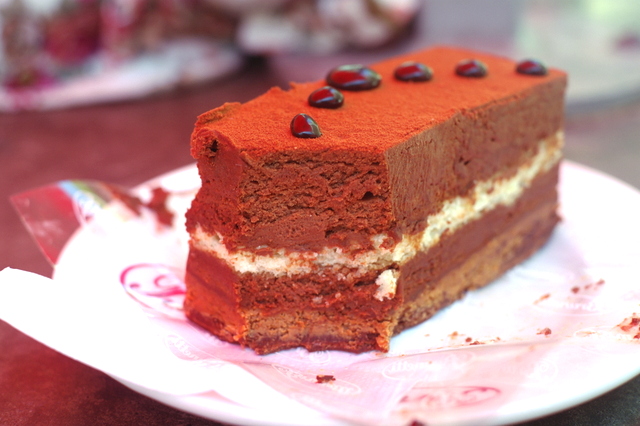 We also saw this somewhere near Melbourne Central. This is the Hopetoun tea rooms and we saw a lot of tourists taking photos of the cake displays! There was also a really long queue. 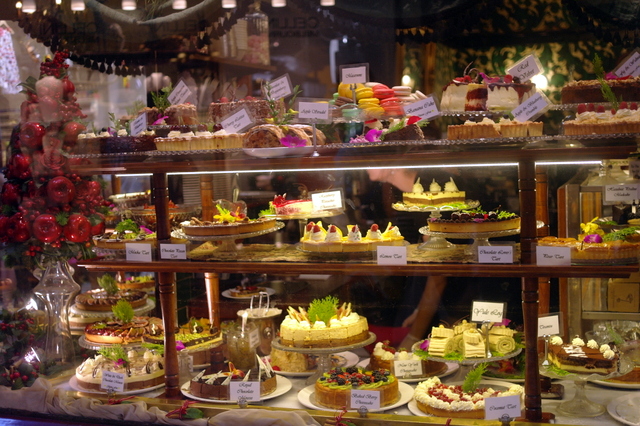 They have been opening some Pappa rich restaurants around Melbourne lately. There's a few in Malaysia. I would say that the ones in Malaysia are probably no point going to, if you ask me. Just upper scale, in a nicer restaurant setting but more expensive Malaysian food. I could easily get better chicken rice and at a cheaper rate, at a hawker food stall. But I would say that it's definitely worth to go here in Melbourne. I don't really know that many good Malaysian restaurants besides Mamak. The ones in Kingsway aren't that great.. I do not like Petaling street. I have always wondered why there are so many people queuing up.

Anyway they have opened up a Pappa rich which is bound to steal a lot of customers away, but reading from the Urbanspoon reviews and according to my sister, the one in Kingsway doesn't sound that great.

My friend, Yvonne, had the oriental chicken chop. She liked the chicken but hated the rice, since it had so much ginger. 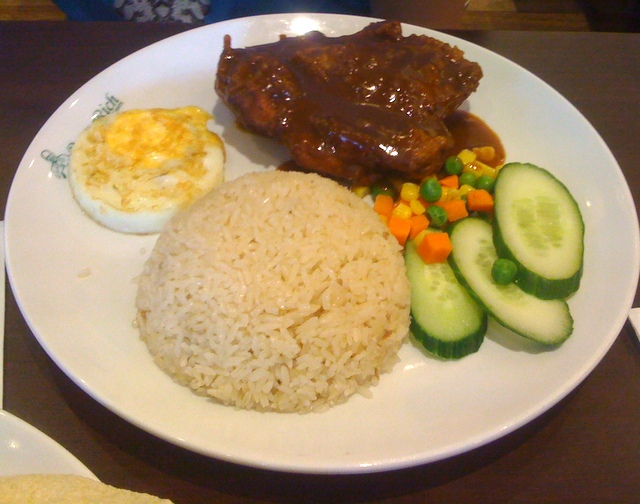 My friend, Tina, had the biryani rice with curry chicken and sambal prawns. The picture on the menu is so deceiving. I mean they blow up the picture, but like woah comparison is like what? Tina really didn't like the biryani rice (she was contemplating between that and the jasmine rice). I found it funny how both my friends aren't Malaysian and they thought the rice was gross. When I tasted it though, I didn't mind it. They liked my roti though! I told them to try the roti but they went with the rice. 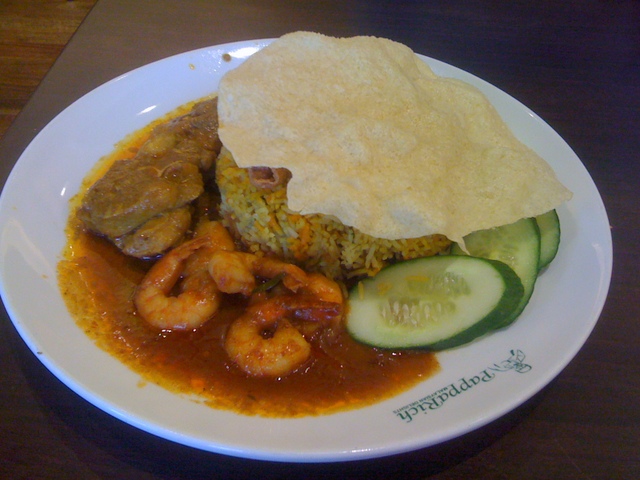 I suggested to order cham (milk tea mixed with coffee) which we all loved! I really do like cham, even though I don't like coffee. I guess it's that sweet element. 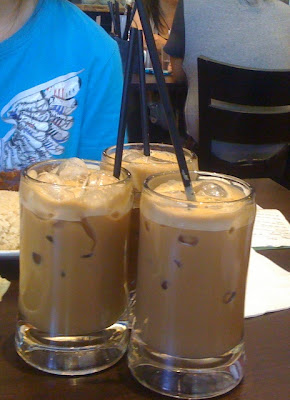 I'd definitely come back soon to Pappa rich. The prices are pretty reasonable too. Typically in Australia, the average dish in a restaurant is about 10 AUD, due to the high wages here.